Home Tech The Death of Kodak 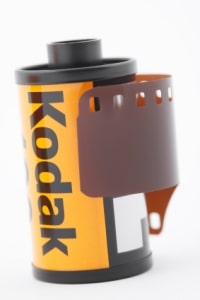 It is with somewhat of a sad heart that this journalist, at least, reads of the retirement of Kodak from making any more film or photo paper. This was inevitable, of course, just as the manual/analogue nature of the Sony Walkman eventually had to be relegated to museum status. The world changes, and technology spins on its own axis at an even more accelerated rate. ‘Old school’ photography – dark rooms and chemicals and too much time needed etc. – can’t possible compete with the digital world of smartphones and their Instagram apps.

But, like vinyl LP’s and analogue recording, this probably won’t be the end of classic photographic techniques. The BBC reports that those bastions of digital life, Apple and Google have joined forces to bid on over 1,000 digital image patents – and Kodak has already stopped making digital cameras to reduce its losses. It’s easy to imagine a smaller company stepping into the gap and producing still-camera film, just as analogue tape went through a similar transformation a decade ago, after recording engineers started stockpiling reels of tape from the ailing firm, Qauntegy. What happens to the ‘old ways’? They become ‘niche,’ that’s all.

Olivier Laurent, news editor at the British Journal of Photography had this to say about the news of Kodak’s demise: “A lot of professionals still shoot with film and like the quality it gives them…the resolution is still a thousand times higher than most digital cameras can offer…a film photograph has a different mood thanks to its grain – it’s about the love of the image and digital still has a hard time trying to reproduce that feeling.” This is very analogous to well, analogue recording. The speed of ‘capturing’ a moment seems to take precedence over quality; one can almost see the greats of photography turning in their graves, but that is technology’s march. There’s nothing we can do, but change with it.