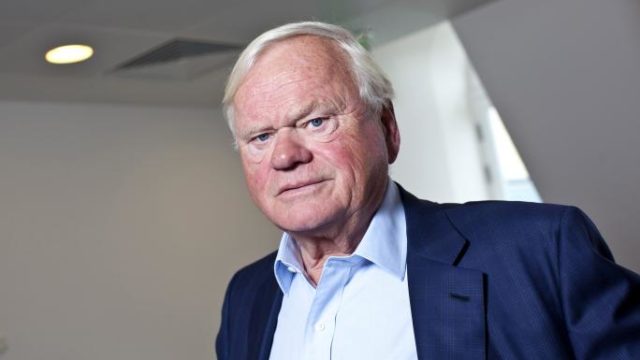 From War Equipment to Wild Salmon

John Fredriksen is a shipping tycoon who is the richest citizen of Cyprus, though he currently lives in the United Kingdom. Fredriksen holds stakes in a number of companies, including the publicly traded Golar and Frontline. He is also a stakeholder in the largest producer of Atlantic salmon, Mowi, as well as a drilling company called Seadrill. Fredriksen has a reported net worth of some $8.36 billion.

Fredriksen was born in Norway to a working-class family in 1944. He began working as a courier for a local shipping broker. He was enrolled in night school but left out of a preference to read his shipping company’s telex instead. He then worked at several other shipping companies across the globe, including in New York, Beirut, and Singapore, and eventually understood that he was best off investing in opportunities presented by wartime instability.

During the 1973 Yom Kippur War, Fredriksen signed contracts for long-term oil-tanker charter contracts and made $40 million five years later when prices made a comeback. Despite the risks he faced in the maritime environment during the Iran-Iraq War in the 1980s, he shipped oil to Syria from Iran, which also turned out to be a highly profitable venture for him.

Throughout the 1990s, Fredriksen continued to add to his oil-tanker fleet as he acquired the companies of rival ship operators. In 1996, after one of his ships called the Sea Empress spilled 50,000 tons of oil, he considered leaving the business, but decided instead to do the exact opposite. He ratcheted up his investments and purchased vessels that were more resistant to spills. He also took over Frontline, a Swedish shipping company.

After predicting a large uptick in oil sales in 2005, Fredriksen established Seadrill, a deep-water rig operator. Today, the initial $200 million that he invested in a 25% stake in Seadrill has become his most lucrative asset, valued at over $4 billion as of 2013.

Fredriksen has made sure to diversify his investments with cash gained from dividends. He purchased over 20% of Marine Harvest, the largest producer of farmed salmon. In 2006, Fredriksen took ownership of his competitor, Smedvig, for $2.7 billion. He also purchased shares in TUI, the largest tourism operator in Europe, and now holds over 15% of the company’s shares.

Fredriksen’s wealth today includes stakes in over a dozen publicly traded companies throughout a diverse range of industries, including food manufacturing, logistics, and shipping and oil services. He owns two holding companies, Geveran Trading Co and Hemen Holding, which are based out of Cyprus. Some of his stakes are also held through Farahead Investment and World Shipholding, based out of Liberia. In addition, while he owns energy trader Arcadia, the Mowi Atlantic salmon company is currently his biggest and most valuable asset.