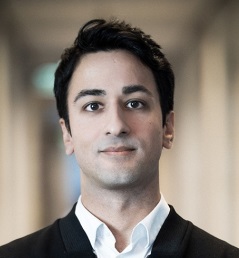 Habib Frost is a doctor, researcher, inventor, and entrepreneur. He is the founder and CEO of Neurescue, a digital biology company that develops technology-driven medical devices for emergency care. Dr. Frost graduated as a medical doctor when he was 23 – the youngest person ever to achieve this in Denmark.

With a deep passion for using technology and innovation in healthcare, Dr. Frost is regularly called upon to share his expertise and speak about digital biology and the future of medicine. He has done extensive work with gene-editing technology, robotics, and medical sensors. He is also a certified Trauma Team Leader at the American College of Surgeons (ATLS).

In 2017 Frost was selected by MIT as an Innovator under 35 and by Forbes as one of the magazines 30 Under 30. In 2015 Dr. Frost won the Singularity U Nordic Global Impact Award for Denmark. In this year he also spent 10 weeks attending the Singularity University Flagship Program in Silicon Valley at NASA Ames.

By combining his medical expertise and entrepreneurial spirit with the drive to save lives, Dr. Habib Frost launched Neurescue as soon as he graduated in 2014. The company aims to improve survival rates and develops medical devices that save lives by treating cardiac arrest and hemorrhage with innovative scientific technology. It all began when he witnessed a devastating case of a little girl who suffered cardiac arrest and could not be resuscitated. As a result the doctor decided to create a device that would significantly improve the chance of survival of anyone suffering from cardiac arrest. He launched the startup and began developing a device that consists of a small catheter attached to a balloon which would be inserted into a blood vessel in the patient’s leg and controlled by a computer system. This is the first device of its kind with a safety mechanism that does not require fluoroscopy. The idea is to create a reliable and safe medical tool with the potential to save countless lives.

The device will be located in the femoral artery where it will potentially obstruct the flow of blood through the aorta as it effectively reroutes blood generated by chest compression applied to the patient. This blood will be directed to the heart and the brain, where it is needed to maximize chances of resuscitation and minimize chances of brain damage. This device will give doctors more time to treat whatever caused cardiac arrest and greatly increase the patient’s chance of survival.

In his TED Talk about the subject, Dr. Frost said, “Today, we only have half an hour to save the life of a person, which we intend to increase to 60-120 minutes.”