Delphine Arnault is a French business executive in the fashion industry. In her role as the executive vice president of the fashion house and luxury goods company Louis Vuitton, Arnault is responsible for the label’s positioning in the luxury market and for supervising all of the brand’s product-related activities. As a member of the board of Louis Vuitton since 2003, she is the first female and youngest person ever to occupy the post. Arnault is the founder of the LVMH Prize, a prestigious award in the industry. She was also selected for the Business of Fashion 500 (BoF 500), a highly regarded index that features people who shape the fashion world.

Arnault was born in Neuilly-sur-Seine in April 1975 to Anne Dewarin and Bernard Arnault, a French billionaire, and the chief executive and chairman of Louis Vuitton Moët Hennessy (LVMH). After graduating with a degree from the London School of Economics, Arnault continued her education and achieved a degree at EDHEC Business School. She launched her career at McKinsey & Company, a United Kingdom-based management consulting company.

In 2000 Delphine Arnault changed her career path to the fashion industry when she took on a role in business development with designer John Galliano’s company. There she gained invaluable hands-on experience in the industry as she helped develop the brand. In 2001, Arnault was appointed as deputy managing director of the executive committee of Christian Dior Couture, a role she held until 2013. During her tenure of over a decade at the fashion brand, Arnault steered the growth of the company and oversaw the significant hiring of Raf Simons in the role of creative director soon after John Galliano departed suddenly. 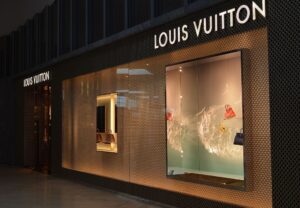 From Christian Dior, Arnault moved on to Louis Vuitton where she is the executive vice president and also a member of the executive committee and of the LVMH board of directors since early 2019. Known for her eye for talent, Arnault was instrumental in persuading the trending designer Nicolas Ghesquière to work for the company as creative head. Besides her responsibilities at Louis Vuitton, Arnault is also a board member of Christian Dior S.A. and of Céline, Pucci, and Loewe and of Havas, a French multinational advertising and public relations company, and 20th Century Studios, Inc. an American film studio and a subsidiary of Walt Disney Studios.

Arnault launched the LVM prize in 2013 to honor and support young fashion designers across the globe. Every year, one designer and three fashion school graduates claim the prestigious prize. According to Arnault, “It is necessary to recognize the talent and creativity, as well as the ways in which we can best help the growth of their business”.

The initiative is not only known for providing coveted mentorship to winners, but also for its growing eco-aware credentials. Sustainability is integrated into the finalists’ work in several ways. Some use recycled fabrics and others revitalize deadstock textiles.