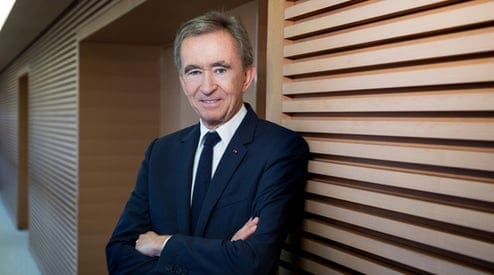 The Third Richest Person in the World

Bernard Arnault is an investor, art collector, and businessman who was born on March 5, 1949 in the French city of Roubaix. He is the chief executive officer and chairman of LVMH, the largest luxury products company in the world. He is also the chairman of Christian Dior. With a reported net worth of $100.4 billion, Arnault is considered to be the richest person in Europe and the third richest person in the world, following Jeff Bezos of Amazon and Bill Gates of Microsoft.

After graduating from the École Polytechnique, Arnault worked for his father’s civil engineering company, Ferret-Savinel. In 1976, he convinced the leadership of the company to sell its construction division for forty million French francs and to shift focus to real estate. The new company, which was renamed Ferinel, developed a niche for holiday accommodation. By 1979, Bernard became the president of the company, succeeding his father.

Together with the assistance of Antoine Bernheim in 1984, Arnault acquired partial ownership and became the CEO of Financière Agache, a luxury goods company. Arnault also took over Boussac Saint-Frères, which owned the Le Bon Marché department store and Christian Dior as well as several other major assets, but which was facing challenges at the time. Arnault made the decision to sell them all except for Le Bon Marché and Christian Dior.

Arnault led LVMH, popularly known as Louis Vuitton, through the execution of a successful plan that has made it one of the biggest luxury groups across the globe. Arnault helped compound the company’s market value fifteen-fold while also spurring the rise of profit and sales by five hundred percent. LVMH now consists of 70 companies, including Dom Perignon champagne and Tag Heuer Watches. In 2018, the company made $53 billion in revenues.

Other than LVMH, Arnault has invested in several web companies, including in Netflix as well as in France’s largest supermarket chain. He also joined the yacht business, purchasing Princess Yachts and Royal Van Lent.

Arnault strongly encourages the idea of shared advantages, focusing on working together with other successful brands in order to help those that are still in the developing stages. Throughout the years, Arnault has acquired the Celine, Kenzo, and Berluti fashion companies as well as the La Tribune financial newspaper, which he sold in 2007 for 240 million euros.