Home Economy How Cultural Landmarks May Be The Key to Revealing the World’s Electronic...

musicMagpie has teamed up with its US brand Decluttr to reveal the potential dangers of a growing e-waste problem. The innovative online music store and the online tech store are using beloved landmarks and cities worldwide to help visualize and compare the scale of waste.

A Growing Concern for the Environment

The 2020 E-waste Monitor report indicated that by 2021, the world is on track to produce roughly 57 million metric tonnes of e-waste. To put the size of this into context, it is equivalent to covering 52% of the earth’s surface in smartphones laid out end-to-end.

The report predicted that, by 2030, there would be 74 million metric tonnes of e-waste globally, making e-waste the most rapidly increasing domestic stream of waste. With population growth on the rise in a digitally reliant world, we deal with constant technology upgrades and short replacement cycles. It’s no wonder that e-waste is expanding three times faster than the population on the planet.

Even with e-waste as a growing concern for the environment, musicMagpie’s research revealed that four out of five Brits have no idea what it is. A third of Brits were unsure about e-waste or didn’t believe that e-waste had any damaging effect on the environment, and 45% thought that it didn’t impact climate change.

The dangers of e-waste are many. Much of this waste ends up in landfills, where harmful chemicals can leak into the soil. If waste companies incinerate these e-products, the fumes release toxic chemicals into the air, contributing to the global warming crisis.

With data from Global E-waste Monitor, musicMagpie created a series of powerful videos and images that helps illustrate the amount of monthly e-waste to the scale and size of famous cultural landmarks and landscapes worldwide.

As an example, the UK reportedly produces a staggering 133,141 tonnes of e-waste in just one month. These numbers are equivalent to the same weight as 11 Shards. In an attempt to compare e-waste production to areas at risk of suffering from the effects of climate change, research showed that global monthly e-waste could cover Antarctica nearly two times over and almost four times over for the Amazon Rainforest.

Using the beauty and historical significance of these cultural icons compared to the harsh reality of the e-waste crisis, the viewer can get a visual representation of the damage caused by not recycling tech products. It creates a dialogue where people can begin to discuss a subject that needs more attention.

As the need for tech products grows, the message of how e-waste affects the environment should be made more readily available to the public. The initiatives set in place by musicMagpie’s visual e-waste cultural landmark/waste comparison project will give people incentive to utilize recycling, refurbishing, and reusing e-products.

Getting on Board to Combat e-Waste

This visual campaign is part of a larger initiative by musicMagpie and Decluttr aimed at educating and raising awareness on the issue of e-waste. By promoting the damaging effects of e-waste disposal and comparing it to cultural landmarks, they aim to encourage world leaders to take action against climate change.

The e-commerce brands added to their message aimed at world leaders attending the G7 summit recently. The project involves a giant sculpture of the G7 leader’s heads erected on Sandy Acres beach. The sculpture called Mount Recyclemore was fabricated out of discarded electronics and stood overlooking Carbis Bay, where the G7 summit took place. The sculpture generated a global conversation about e-waste.

musicMagpie and Decluttr give half a million consumer tech devices a second life every year. They refurbish over 95% of the electronic products they purchase and use the other 5% in refurbishing other products. 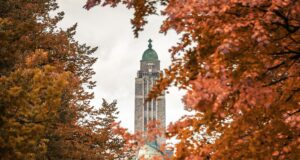