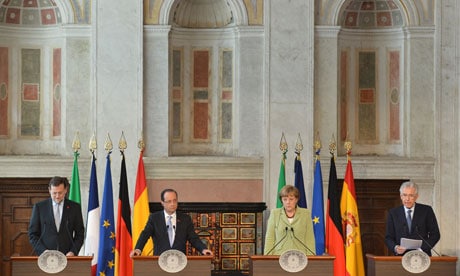 It’s been reported that the four big players in the eurozone – Germany, France, Italy and Spain – have met and agreed on a new ‘growth package’ for the embattled region. Is this a new chapter of real decision-making, or smoke and mirrors and empty gestures? The four have agreed to push forward 130bn euros for, what the BBC called “infrastructure and other investments,” but what one is really left with is the sense that this is more of a PR stunt for the markets. But, this will mean a cash injection for European banks and what has been called ‘project bonds’ for investment in new transportation across Europe.

What this meeting did achieve is a small victory for French President Francois Hollande, as he came to the table wanting a ‘growth package’ and got it – it’s also a boon for the French to say, ‘we changed Angela Merkel’s tune.’ But the reality of the situation was illuminated nicely by BBC political correspondent, Norman Smith: “when you delve into the detail this is not new money, this is money already included in the EIB and spare money still hanging around in regional funds…So it is not a massive injection of cash to rescue struggling European economies.” Nor is it that most essential of ideas ­– a real integration of national monetary policies and the agreement of more stable European nations absorbing the debt of those less well off.

As for the much-bandied ‘eurobonds’ these were discussed but no agreements were made. The four did manage to inch forward the idea of a financial transaction tax, much reviled by the UK and one that will see George Osborne putting on his gloves to get in the ring if this idea properly sees the light of day. But, it seems that for all the fanfare and talk of ‘real agendas’ by the four at the meeting, this was really just another display of political posturing.