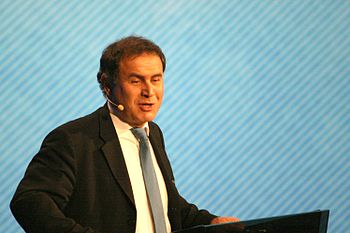 Davos is synonymous with the uber powerful who, for some inexplicable reason, apparently want to solve some of the world’s most pressing problems. The reason could be based in human altruism. Or it could be that solving hard problems also doubles as a networking event. In the case of the World Economic Forum, we’re talking about a networking event on steroids.

The basic question is: Does all this elite shoulder rubbing at a Swiss resort actually make a difference? The reactions tend to be diametrical. There is the view that Davos is some kind of pantheon of divine beings with all the answers to humanity’s problems. And then there is the equally strong view that Davos is a massive out-of-touch feel-good exercise that passes for problem-solving in the same way that French queens who recommend cake-eating passes for dietary advice.

The WEF sideshows can certainly entertain and surprise. Look, there’s Iran’s new moderate president! You can see the world changing for the better right in front of you. Then there is the subculture of business heavyweights and culture icons who take pride in ignoring Davos. A certain Steve Jobs was among their ranks.

But sometimes Davos is very serious and hard to dismiss. This year Nouriel Roubini, the so-called Doctor Doom due to his forecasting of the global economic crisis, was on hand. Roubini is an all around impressive thinker, an economic superstar and professor at New York University. Of all the WEF headliners, Roubini ranks fifth in number of Twitter followers.

Roubini’s financial analysis of BRICS and emerging markets is important because it doesn’t fall under the category of painless band aid solutions. Roubini’s basic contention is that the BRICS have exhausted their easy growth options.

Other emerging market economies are in the same boat, having failed to deliver on earlier promises of rapid development and growth. They concentrated on the macro-based reforms to push productivity, and perhaps give the appearance of massive structural overhaul. And these policies worked in the short term to impress foreign investors and analysts.

But Roubini notes that currently these economic changes seem more like window dressing because they lack the core of what in fact constitutes a market-oriented reform. The problem is really one of excess – too much public sector activity and state-owned allocation of resources. The culprits are actually quite familiar to anyone with even a passing knowledge of command economies: We have trade protectionism, nationalism of resources, and cronyism. The antidotes are rule of law, private investment, and open markets.

Roubini notes that stagnation will hit hardest for economies that load all their eggs in one basket. The sharp decline in the commodities market – take gold for example – will hurt commodity-oriented BRICS even in credit-fuelled investment hot spots like China.

Dr. Doom’s most serious blow comes at the end. Maybe, Roubini, argues the BRICS might
end up mired in a middle-income trap. Basically, the point is that even combining all the ingredients for economic mobility does not guarantee success. The transition from middle-income to developed market is the secret sauce that could elude the BRICS regardless of good fiscal policy making. For those who think that Davos is all sunny speeches and unbridled optimism, Roubini is a gust of fresh air.